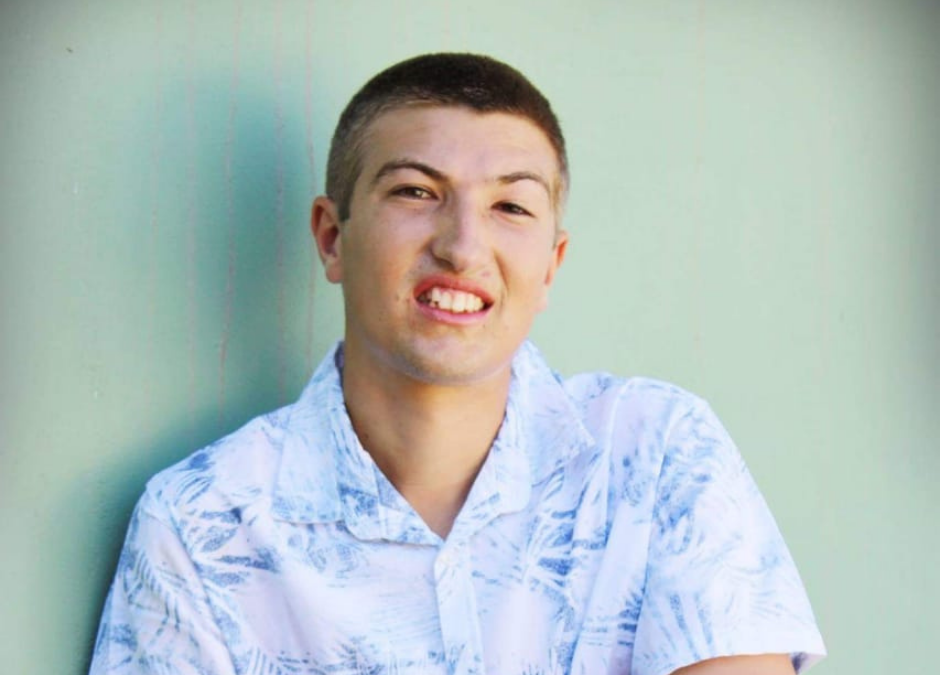 Francois is his parent’s second child and one of four children – his other brothers and sisters are neurotypical. When you ask his mom, Adel about the past, she is only thankful that her child with the sunshine in his smile overcame all the bad moments in his life and that she wants to focus on that, but she still shares their journey.

She recalls that she had a normal pregnancy with Francois and natural birth without any painkillers since it only took about 30 minutes before Francois entered the world at Rob Ferreira hospital in Nelspruit.  She went home the next day already, but had to come back two days later since Francois could not digest breast milk or any other formula milk, despite his paediatrician’s best efforts.

Eventually, he was referred to Hendrik Verwoerd hospital in Johannesburg. with a long and difficult road that followed, including various hospital admissions. Francois was 3 months old and only weighed 2.75kg.  The doctors prepared his parents that he could die and if he survived he would never be able to walk and lead a difficult life.

However, just like any special needs mom, Adel refused to give up!  She made the decision to discharge him, take him home, and started giving him cows milk and mealie meal – and he started gaining weight!  Certain aspects surrounding his development still bothered her and they decided to move from Nelspruit to Langebaan so that he could go to the Red Cross Children’s Hospital.

During their visit to the Red Cross Children’s hospital, it was found that he had problems with his vision and he received glasses. The surgical department suggested that his hips are to be broken and repositioned in order to grow correctly and his feet also adjusted. The genetics department wanted to conduct further tests  because his case was so unique and his symptoms made a single diagnosis difficult.

His grandmother however asked his parents to reconsider submitting her grandchild to all these tests and leave him to just be a child and enjoy his life. And that is what they did without regretting the decision to this day!

Adel and Francois’ dad got divorced, but she remarried a wonderful man, Andries Botha, who accepts her children and supports her!  Every morning Francois sends his stepdad, Oom Andries, ‘n message and later on asks him what he is doing, what he ate, and just before bedtime he says goodnight to him.

Adel heard about Sunfield Home from Alta du Toit school and Francois’ application was finalised in December 2020. whereafter he was admitted to Sunfield Home on 11 January 2021.  Francois tells everyone that  Sunfield Home is his home and that he only visits his parent’s homes. The staff is also very supportive and loving towards him and really sacrifices a lot through all the effort, time and dedication they put into the residents.

Francois is very neat and dedicated to his routine. He is also a very loving and bubbly person. Whenever he meets anyone, whether he knows them or not, he will tell them that they are looking nice, give them a hug and start talking to them. He loves animals and baking and is never too busy to help his stepdad, Oom Andries, with tasks.  When he visits at home, he will get up early in the morning, make up his bed, brush his teeth and wash his face. Then he proceeds to greet his parents and ensure that his siblings are ready for school before he feeds the budgies.  Like a policeman, he makes sure their rooms are neat and tidy and that they have brushed their teeth!  After they have left for school, he will help the domestic, Tannie Anita, with chores around the house.  He is always friendly and has never told a lie!

His mom shares that the nurses at Sunfield Home are very special to Francois. They have never had any complaints about him and always provide the kind of feedback that makes any parent proud. He also talks about his moments in the kitchen with Oom Handré and the jokes they share and the fact that he loves Tannie Dora, his Sunfield Housemother, very much.

Every day that his mom speaks to him, his eyes will sparkle and he would smile because he is happy here.  It is any mother’s dream to see her child happy and content and it gives her so much peace of mind knowing that he will be safe here and can spend the rest of his life at Sunfield Home being loved and cared for.

Adel really shines when she speaks about her child, saying that children with a disability are a blessing. When she does become despondent she is thankful that her child will always be close to her and not somewhere out in the world, alone and subjected to negative elements such as peer pressure and substance abuse.

There were many days that were not easy and she often worried about the future. Today she looks back and asks “How on earth did I manage to not give up hope?”

Sy smiles knowingly because her child knows God and he is happy.  The only thing these special children need is love and acceptance.

There have been times when they struggled, but Adel’s parents always supported them, even if they did not always have the means to give. She thanks her mom for being her pillar of support and also wish to thank another benefactor, Christine Mouton, who helped them financially.

Currently, Francois’ parents take sole responsibility for his fees, and even though it is sometimes difficult, she knows it is worth every cent because her child is happy.