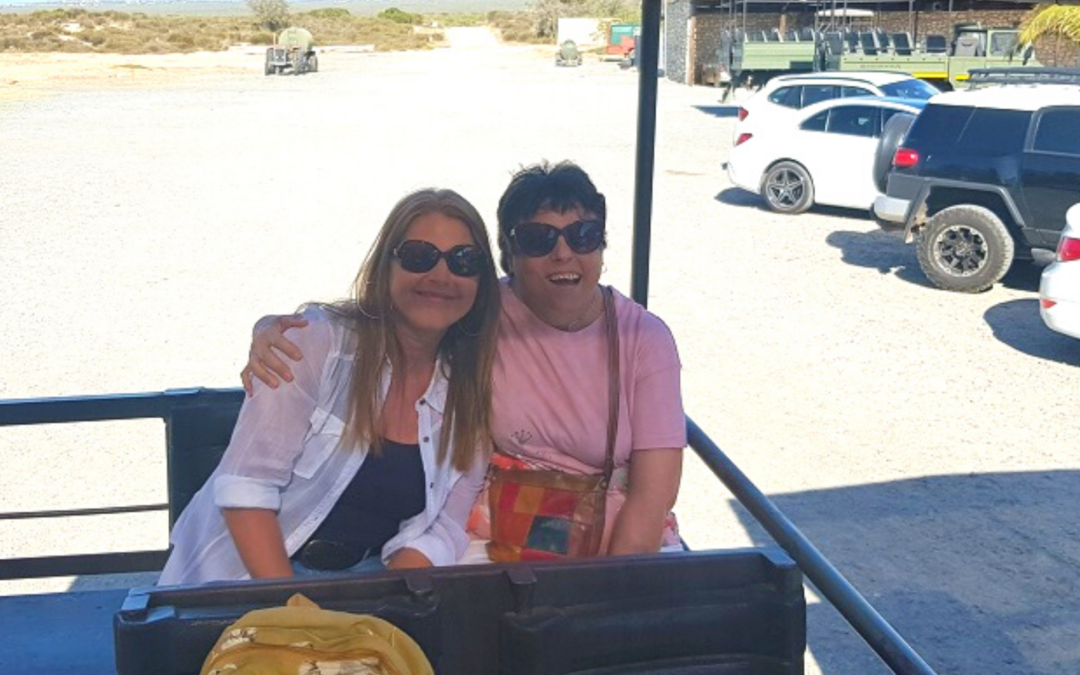 We often forget about the special bond that exists between a person with an intellectual disability and their siblings. This ambivalent relationship can include many highs and often a few unique challenges. We chatted to Jacqui Newton, sister of Ro-Anne Van Biljon about their bond.

Ro-Anne was born when Jacqui was 3 and a half years old and suffered a stroke at the age of 11 months due to high blood pressure as a result of medication, which caused her disability. She is both physically and intellectually disabled. Due to her stroke, the left side of her body was paralysed. Although she can walk, she walks with difficulty and cannot use her left hand at all. She also suffers from epilepsy.

Ro-Anne attended Paarl School in Paarl and then moved to Martie Du Plessis when the family lived in Bloemfontein.  The family returned to Cape Town when Ro-Anne was about 10 years old where she attended the Alta du Toit School in Kuils River until she was 19 years old.

A grown up responsibility

Jacqui’s role as sibling has always been to protect her sister against anything that can possibly harm her and to make sure that she is safe and happy, essentially a carer and guardian, even as a child.

She was frequently with her in hospital before starting school as she essentially spent her first 5 birthdays in hospital and became an avid reader due to the amazing children’s library that they had. As to ensure that she and Ro-Anne understood each other, she had to learn to listen carefully to communicate with her in an effective way. This has taught Jacqui to become a good listener and enabled her to communicate well with people.

Says Jacqui “She has also taught me empathy. As a child, I often tried to do things with one so that I could be like her. This taught me to develop a deep understanding of people and what they may be going through. She taught me to be very grateful for life in general as well as the things that many of us take for granted, such as the use of one’s limbs, the ability to run, the ability to clap.”

Since she was responsible for Ro-anne’s care in many ways since a young age, Jacqui developed a very strong sense of responsibility and she now tends to put everyone’s else’s needs before her own.

How she observed her parents

Jacqui indicated that Ro-Anne’s disability placed tremendous strain on her parents as they did not have a textbook on how to deal with all the realities and emotional turmoil of having a mentally and physically disabled child. Their mother passed away when Ro-Anne was 18 and she had a very close relationship with her father, who also passed away about 5 years ago.

The home away from home

Jacqui’s father discovered Sunfield Home during its infancy with only about 20 residents at the time. He chose Sunfield Home to become Ro-anne’s home away from home because of its surrounding beauty, tranquillity and the kindness and compassion of the staff. Ro-Anne has been living at Sunfield Home since January 1995.

Says Jacqui, “I always know that Ro-Anne is well taken care of and safe at Sunfield Home due to the amazing kindness, generosity of spirit and dedication of each and every one of the staff members. They also have a lot of activities and outings which stimulate her and make her happy. She is not just a resident, but a family member. There is always someone that has done something special for her or kept a special eye over her and comforted her when necessary.”

Ro-Anne can knit with one hand and has been part of many educational visits to schools. She absolutely loves animals and most of all, their dog, Harley. She knitted him a blanket for his bed which took her two years! Harley received the blanket for Christmas last year. She never gives up on any task she sets her mind too and is now busy knitting Jacqui a lockdown scarf, which she will wear with absolute pride.

Ro-Anne is always keen to be part of new activities and experiences, she loves music and has an incredibly large CD and DVD collection.

She also has an amazing and natural technical ability, She is fluent in English and Afrikaans and makes everyone laugh with some of her direct translations.

She has an amazing memory, an ability with numbers and always remembers birthdays.

Her family is her life.

What the world should  know

Jacqui asks that the outside worls should be patient and kind to people with disabilities. They should remind themselves that these people are intellectually disabled and to not treat them as if they were adults with adult emotions. Their brains do not always work as we expect it to and sometimes we have to remind ourselves that they needs extra patience and understanding.

Give them lots of love and make them part of your life.

She wants us to encourage our children to interact with people with disabilities and to explain to them what it means to have a disability, that there is nothing to fear or be nervous about, but to accept these precious individuals as normal people, just differently abled.