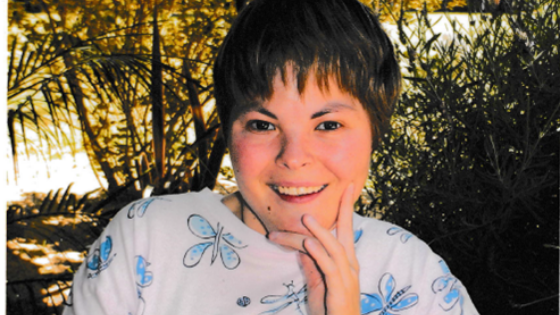 Louise Ozrovech is the youngest daughter of Solly and Barbara Ozrovech and one of three children. During the first five months of her life she had three operations, one of them being a three-hour long operation to remove a part of her skull in her forehead that was placing pressure on her brain.

Her development was slow though her parents assumed it was as a result of the operation, until she was about 3 years old when they realised there was a bigger problem.

After various tests they discovered that a part of her 9th chromosome was missing and that she was intellectually disabled.

Suddenly her parents were confronted with many questions and they had few answers. Where would she go to school and how do they prepare her for the life ahead of her?

The path so far

They heard of Cheré Botha School for intellectually disabled children and twice a week for three years, Barbara drove from Wellington to Bellville so that Louise  could attend school there. Louise advanced well and her parents felt more prepared for the road ahead.

A traumatic time followed when Barbara realised Louise would have to start primary school and live in a hostel from the age of 7. Barbara wanted to move closer with all of her heart so that she could be with Louise but Gloria Botha, headmaster of Cheré Botha School, explained that she could not disrupt four people’s lives for the sake of one.

She was right and Louise was eventually very happy during her school career at Alta Du Toit. Every weekend when she came home she could not wait to return to school again the following Monday.

When Louise turned 18 she had to move onto the next phase of her life. Just after Sunfield Home was founded in Wellington in 1991, Chris Bennett contacted Solly, her father, to serve on the Board of Directors and since they lived in Wellington it was the ideal solution for Louise.

In January 2002 Louise found her place at Sunfield Home in Wellington and has now already been a resident for 18 years. The staff helped her to adjust and learn new things. Since Louise’s dexterity was not too good, the staff always had a plan B if plan A didn’t work out. Louise also wanted to work in the laundry room and had a wonderful sense of humour. If you had asked Louise how things were going at Sunfield Home, she would always say that it was going well, and that the food was ‘sooo’ good.

Although Louise did not perform too well scholastically, her communication is still very good. She loves music, carpet weaving and building puzzles. She is already building 1000-piece puzzles!

Louise and Barbara spend lots of time together. They go to the movies and out to markets regularly; Louise knows where the best coffee and cheesecake can be found and ultimately her parents know that she is happy and well taken care of at Sunfield Home.

The Ozrovechs believe that disabled children should be nurtured and that the parents of these children should continue to trust that the Lord will provide them with strength to endure the difficult times they may face.